On a train from Barcelona-Madrid I started working with an R package called ggrides. To my surprise, the package contains one dataset that documents the change in independent/unionist vote for all Catalan municipalities from 1980 to 2015. This is very cool! Needless to say, I left what I was doing and started to dive into the dataset.

Very straight forward. It’s the ‘Indy’ or Independent vote and the ‘Unionist’ vote from 1980 until 2015. The data is complete for nearly all Municipalities, meaning that the data is available for all years. Only a handful (~ 40) do not have data starting from 1980.

Basically, I wanted to answer one question: has the indepence vote grown over time? This question is of general interest considering that the topic is being hotly debated in the media and next week new Catalan elections will be held in a scenario never seen before; after independent parties proclaimed unilateral independece and the government seized control of Catalunya. The elections are predicted to be very contested with Independent parties losing some votes.

With that said, let’s dive into the data! 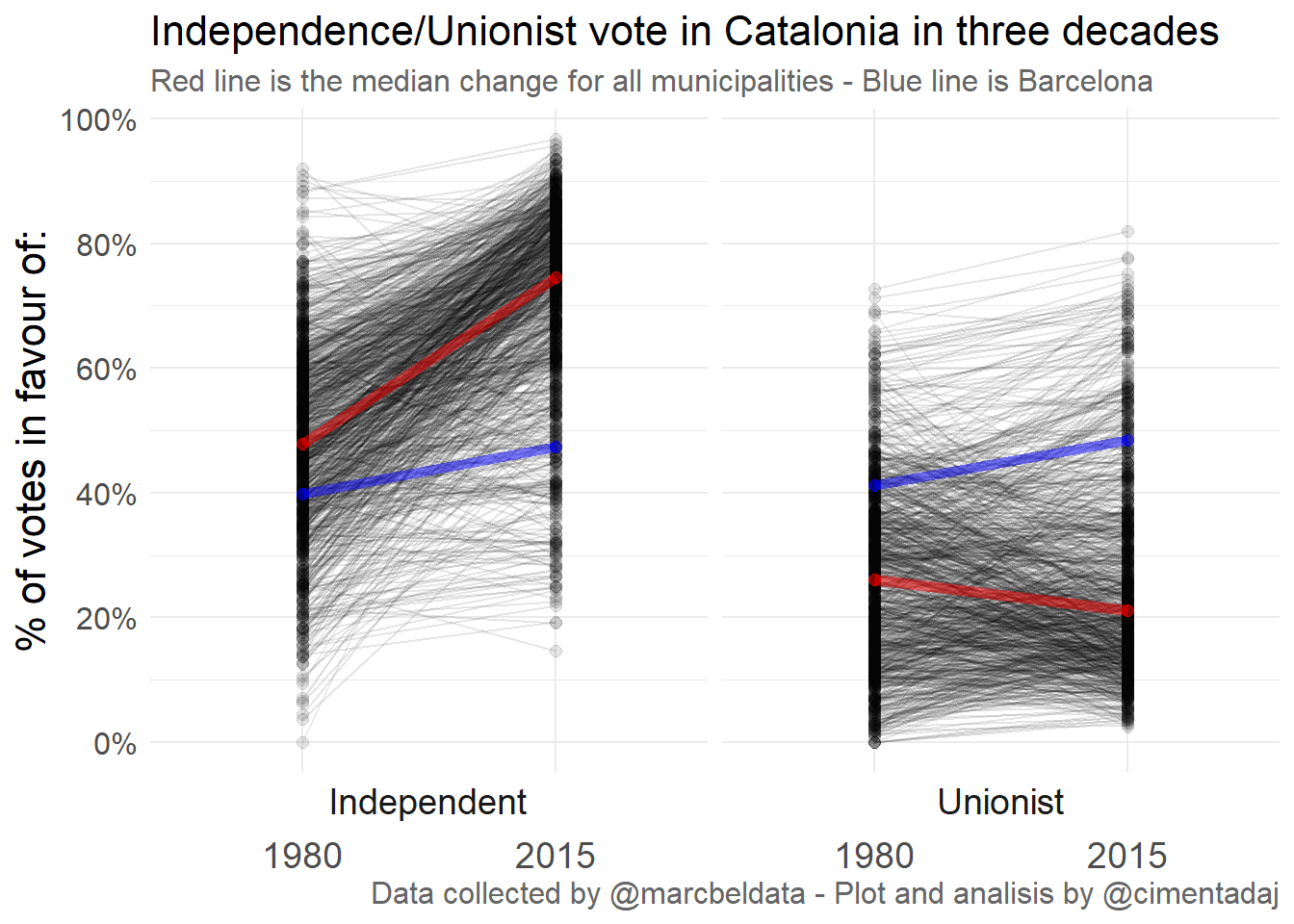 I was very surprised with this plot. On the left panel we can see the increase of independence votes in the last 35 years. The red line is the median change for all municipalities. There is a huge average increase from around 49% to over 70%. In fact, it’s not just an artifact of mean/median with big variance. If we look at the bulk of the distribution on the right line and then the left line, we see an upwards shift in the whole distribution.

On the other hand, the unionist vote seems to have decreased! The left/right distributions seem to be very similar (but it looks like the distribution of the right line has some outliers shifting upwards). But remember something: these are all municipalities. Municipalities might have 1000 citizen or even less! Consider the lonely town in a mountain with 50 people voting for independent parties: that’s also a municipality.

It is for this reason that we need to pay attention to places like Barcelona, which have over 1 million residents and definately weigh in more in proportion. And that’s where the interesting thing about this plot arises: the Barcelona change is practically the same. Not only have the votes increased very very similarly for both sides, but they’re also at the same level of support. Both blue lines look pretty much identical.

Don’t forget: small differences can make a difference, specially in elections. Perhaps they are different but we need to take a closer look.

Let’s plot the independence/unionist evolution only for Barcelona. 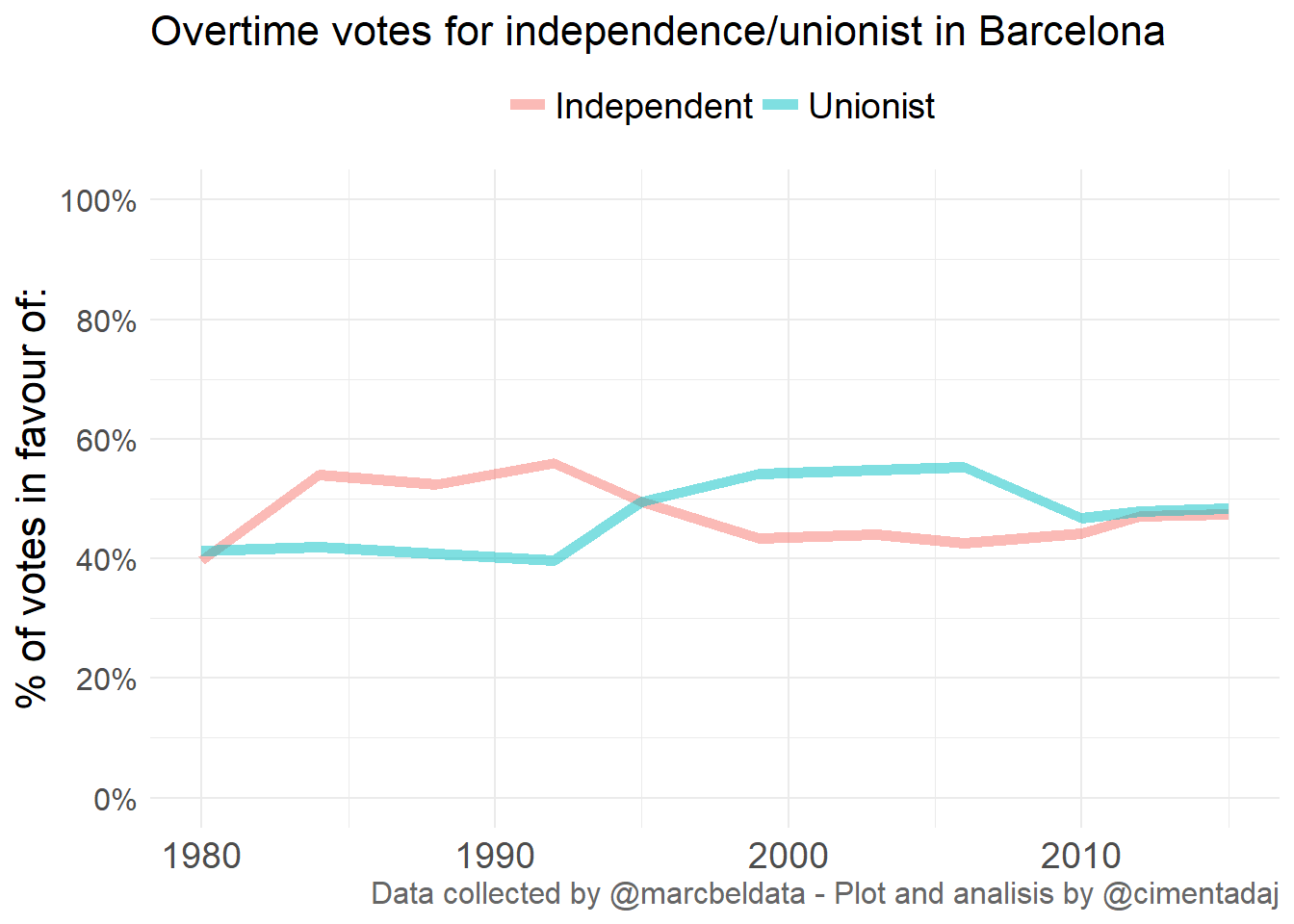 Despite most municipalities are for independence, Barcelona, by only a small margin, has a majority of people voting for unionist parties. Be aware that these votes are not ‘referendums’ carried out every year. These are votes towards independence/unionist parties, which is a different thing. Also note that these are not predictions/forecasts, so they don’t have uncertainty intervals or margins of errors. This is empirical data from voter turnout.

I also tried other big municipalities such as Sabadell and found that unionism trumps over independence much strongly. Yet in others like Lleida, Independence seems to be on top. For a look at specific municipalities, check the post by Marc Belzunces

A note on next week’s elections

This data takes us as far as 2015. Catalonia has suffered dramatic changes since 2015 specially due to the independence movement. These data are most likely not a good representation of what’s gonna happen next week. Big municipalities have usually been majority unionists according to polls, but the differences are tiny and we’ve seen dramatic changes with independence parties proclaiming unilateral independence. There are good attempts at predicting catalan elections (in Spanish) so tune in next week to see what happens.